Welcome!  Today we are chatting with Ashley Dooley, author of the Authority series.

Tell us a little about yourself.  Have you always wanted to be an author?
AD:  I am a stay-at-home, homeschooling mom of two. I married my junior high sweet heart (We started ‘dating’ when I was 13!).  I’ve always been creative but at first I let it all out with hairstyling and makeup. Later, I started drawing and selling my work and did fairly well at that but was always so wrapped up in whatever book I was reading that I procrastinated, got shit on for it and then eventually started to not enjoy drawing as much any more. I’m a firm believer in doing what you love (You know the saying from Confucius? I’ve never actually worked a day in my life)! Writing a book never really entered my mind until a lot later. I didn’t think I had it in me, really. I didn’t do great in school and I never really considered myself a ‘writer’ even though I dabbled with short stories for fun. After reading a few really shitty books I thought, ‘Pfft… I can do better than this!’ and then figured, why not?

Are you a planner or a pantser when it comes to your writing?
AD:  When it comes to my writing process, I am DEFINITELY a planner. I have no idea how ‘pantsers’ do it! My story lines are carefully jotted down and then I dissect and dissect until there is a bare skeleton, and every other detail that makes up its anatomy. Only then do I start to put it all back together. I am, essentially, Frankenstein. Some parts, I admit, are thrown in there (I’m still basically a newborn when it comes to writing for real-life). I don’t consider myself a professional author. I don’t take myself too seriously.

Describe the protagonist from your Authority series.  Where did you get the inspiration for her?
AD: The protagonist in the Authority series is Tatum. She was raised as the daughter of a mob-boss and later becomes one herself. She is beautiful (What protagonist isn’t, right?), tough and more than a little unhinged. Girl is insane!  I was getting really annoyed with needy, clueless females in books (Anastasia Steele…Sigh). I consider myself to be a no-bullshit type girl so relating to these characters was difficult. I have a daughter who loves reading and the thoughts of her reading stories (not that she is allowed to read MY books) that portrayed women as unintelligent, weak and in need of a man to take care of them pisses me off. Don’t get me wrong. I LOVE a good love story. It’s the prerequisite for everything I read and write however it needs to be equal. Tatum kind of falls in with this reputable gang and takes matters into her own hands. She saves them just as much as they save her.

What do you read for pleasure?  Could you tell us a few of your favourite authors or books?
AD: For pleasure I read anything. Seriously. I’d have to say that the only genre that doesn’t really appeal to me though is horror. I’m a wimp. I can’t even watch commercials for scary movies. My favorite author at the moment is probably Jojo Moyes. The Girl You Left Behind is by far, one of my all time favorites. In that list as well I’d include Richelle Mead, Cassandra Clare, Deborah Harkness, Ami McKay and of course, Jane Austen. Favorite books I’d say are Pride and Prejudice, Jane Eyre, The Virgin Cure and The Vampire Academy series.

Do you have any advice to people when they say they want to write a book?
AD: The advice I’d give anyone who wants to publish a book is just to go for it. Have an editor, an amazing cover that doesn’t look too cheap and thick skin because not everyone is going to like what you have to say and if you can’t get picked up by a publisher, than do it yourself. What do you have to lose? 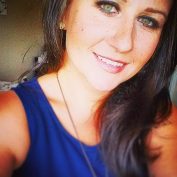 Ashley Dooley is a stay at home, homeschooling mother of two based in Calgary, Alberta. Since early childhood, Ashley was drawn to all things creative. Hairstyling and makeup started her first career, while art and writing came later on. She writes for her love of books and her need for fun stories.  Altering Authority from the Authority series is her first novel to be released. 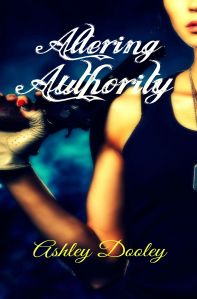 “Jager watched as she pulled off his shirt and took a moment to appreciate what was happening, where he was and who he was with. He devoured her body with his eyes. His appetite for her would never be satisfied.”

Twenty-six-year-old Tatum has always lived luxuriously, and thrived in the shadow of her mobster father. After taking over the family businesses when he dies unexpectedly, a family secret comes to light and turns her world upside down.
She is thrown into the mix with another gang of criminals with very different lifestyles and opinions. When she meets their leader, the sexy, mercurial and very dangerous Jager she is annoyed by his icy cold demeanor and his belief that their lifestyle is no place for a woman. Determined to change his mind, Tatum sets out on a course that not only causes him to open up to her and see her as an equal, but forces him to face his past and acknowledge that he’s fallen in love with her.  When they accept their feelings, will their obligations allow them to be together? Or will it be too late?

Amidst the chaos surrounding Jager’s arrest, Tatum finds herself not only a mother figure to his boys, but a single one at that. Determined to get him out at any cost, Tatum is fighting against the odds when her new family begin to turn their backs on her when she needs them most. Will she get Authority out in time to salvage her relationship with his brothers and keep his sons from going down the same dark path as their father or will she lose everything that means the most to her?

5 thoughts on “An Interview with Ashley Dooley”