weeks until the release of Hell to Pay. Have you pre-ordered your copy yet?

Release day is drawing closer. The edits are complete and the final files will be ready soon. I’m getting excited to share Harry’s next adventure with you, so I thought I’d give you a sneak peek. Enjoy!

“You told him you’d do what?”  Tess laughed and gaped at me in amazement.
“I told him I would cook dinner.  What’s the big deal?  How hard can it be?”
“Harry, you’ve never cooked anything in your life.”
“Sure I have.”
“Macaroni and cheese from a box doesn’t count.”
I frowned at her.  She had a point.  “Well, I guess it’s about time I tried then, isn’t it?  Now are you going to help me find a recipe or not?  I still have to run to the grocery store.”
“Perhaps I can be of some assistance?”
The computerized voice came from the speakers on the desk in the corner just as the screen blinked on, its now familiar animated robot waving at us from across the room.
“Bryce!  Where have you been?  No, scratch that.  I don’t want to know.”  Now that Bryce had unlimited, nearly instantaneous access to anywhere in the world the Internet could take him, he tended to disappear for long periods of time, more often than not surfing porn sites.  I didn’t need to hear a play-by-play of his latest stop.
“I’m eager to hear how the GhostCam 3000 worked,” Bryce replied.
“The what?  Oh, the tablet app.  It worked great, didn’t it, Tess?”
“Yeah, it did.”
“Cool.  I’m accessing the tablet now via the network so I can analyze the recording.”
“It recorded everything?” Tess looked surprised.  “So we can watch it again?”
“Can we skip the technical conversation right now and find me a recipe instead?”
The printer suddenly beeped and spit out a page.  I walked over and grabbed it.
“Easy Chicken and Rice,” Bryce intoned, his computer voice taking on an accent that suspiciously sounded like Julia Child.  “It only has five ingredients and a difficulty rating of one spoon.  Even you should be able to handle it, Harry.”
“Gee, thanks.”  I bit my lip, peering over the instructions.  “Actually, this is great.  Thanks!”  I sat down beside Tess at the kitchen island and made a list.  The chicken was supposed to take an hour and I still had to go to the store.  I needed to get cracking.
“So now that Bryce has solved your cooking crisis, can we talk about something else?”  Tess turned to face me.
“Sure, as long as it doesn’t have anything to do with you moving out,” I replied, only half-joking.
Tess snorted and then pulled a green sheet of paper from the stack of mail that had been sitting on the counter.   “Did you see this?”  She shoved it towards me.
I looked at it with a puzzled frown.  It was a flyer advertising a new nightclub called Wishes.  “No.  I’ve never heard of it.”  I pushed the flyer back to Tess.
“I think we should go check it out.  There’s a two-for-one drink special every night this month,” she replied, tapping at the flyer.
“Sure, why not?  What’s the big deal?  Why are you acting weird about asking me to go to a club?”  It wasn’t like we had never been out dancing together before, and my dating Nash hadn’t changed anything.
“It’s…well…”
Tess bit her lip and tapped the flyer again, this time pointing to the address listed at the bottom of the page.  I stared at it a moment, trying to figure out why it sounded familiar.
“Omigod!  Is that where I think it is?”
“If you’re thinking that it’s the same address as the warehouse where DiCastro tried to sacrifice you to the Egyptian god Osiris, then yes, it is.”
“They made it into a nightclub?  Who?  Who owns it?”
“I don’t know, but I heard from some of the guys at the gym that it’s been completely renovated and totally tricked out.  You won’t even recognize it.”  She clasped her hands under her chin and batted her best puppy-dog eyes at me.  “Puh-lease, Harry?  Can we go?”
I wrinkled my nose at the idea.  I didn’t particularly have fond memories of the place.  I still had the occasional nightmare about it.  “I don’t know.  I’ll think about it, okay?”
Satisfied with my answer, Tess nodded and hopped down off her stool.  “Great.  I’ve gotta go.  I promised Uncle Rigo I would inventory the new crossbow supplies tonight.”  She turned and waved on her way to the door.  “Good luck with your dinner, Harry.”  She gave me an impish grin.  “Don’t forget the fire extinguisher is under the sink.”
“Oh, ha-ha,” I replied, flipping her the bird.  “Just for that, I won’t save you any leftovers.”
“Promises, promises.”  Tess grinned at me again and then hurried out the door.

Pre-order Hell to Pay on Kobo and Amazon today!

Yay! I have a release date for Harry’s next book, Hell to Pay.

Mark your calendars!
Better yet, get the pre-order now.*

Available on Amazon and Kobo.

Did you get a new Kindle over the holidays? Maybe an Amazon gift card you are itching to spend? To help you heat up January with some spicy reads, I’ve temporarily lowered the prices of all of my romance offerings. Prices will increase without warning, so get them at the lowered price while you can. For those looking for Kobo (epub), don’t despair, my romance titles will be coming soon. 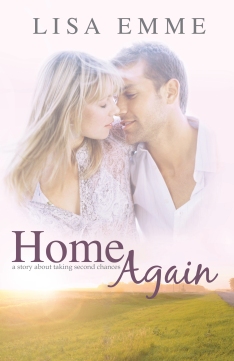 They say you can’t go home again.  Allie Daniels hopes they are wrong, whoever they are.  After a series of misfortunes, she and her small son have come home to the town she thought she had left behind.  She’s just looking for a safe place to raise her son.  The last thing she wants is any more complications.

Mike Finn didn’t roll into town on his Harley looking for love; he just wants to find a place to call home.  Hoping to escape the fast-paced, anonymous life in the city, he’s bought a partnership in the local veterinarian practice.  The small town has a lot to offer – especially after a chance encounter with Allie.

When Mike first sets eyes on Allie, sparks fly.  He knows there’s something there, but the reluctant, single mom is going to take some convincing.  Good thing Mike is a persistent man.  When strange things start to happen around town, his protective instinct is sent into high gear.  It’s just as well, because when Allie starts playing detective, she may find herself in over her head. 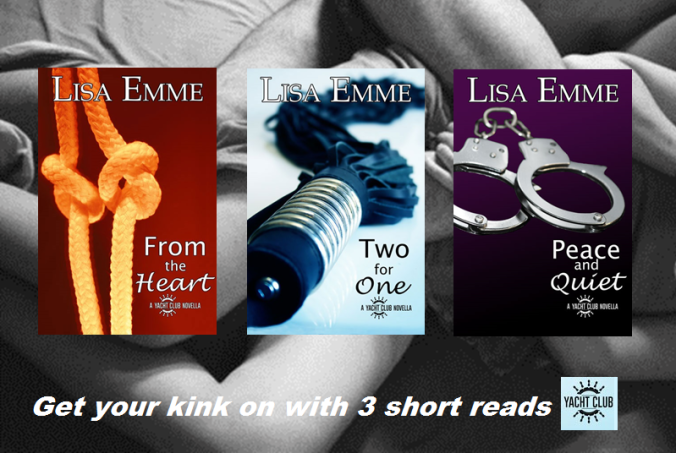 Get your kink on with three short, spicy reads. Each sexy story brings a bit of ink, a lot of kink, topped with a hint of magic. Intended for a mature audience. Explicit language and content.

Daisy Andrews has been burned by love before. Now she prefers to play it safe and keep things on the casual side. So how then, does a woman that prefers her sex with a little kink, satisfy her need to be owned?

Enter the Yacht Club. Daisy has found her place among its regulars, but when a stranger arrives and she finds herself falling for the handsome newcomer, a magical tattoo she had long forgotten begins to stir. Can Daisy maintain control and keep a professional distance or will she submit? More importantly, will she trust her heart?

Far from home, Kimi Jones is on the hunt for a predator and she’ll stop at nothing to get her man. On leave from the Honolulu homicide unit, Kimi tracks her quarry to Vancouver, where she learns of a secret club called the Yacht Club.

Determined to find and stop the ruthless sexual sadist, Kimi isn’t above bending a few laws to do it. But when she encounters a sexy stranger on the beach and a one-night stand turns into more than she bargained for, will Kimi be able to keep her own secrets?

Pax Lightfoot’s name means peace – something that’s hard to come by these days, that is until she meets Tyler.

Tyler is an oasis of calm in a sea of chaos and Pax finds herself drawn to him. He’s more than she ever imagined, but is she enough for him?

Tyler enjoys the single life. As a member of the exclusive Yacht Club, he has his pick of playmates, all of which share in his particular kind of kink. So why is he attracted to the fiery little red-head? She may have curves in all the right places, but her sweet and innocent demeanor screams vanilla. Can these two opposites attract?