Top of the morning to you and a Happy St. Paddy’s Day. A few years ago I was lucky enough to do a whirlwind road trip around the beautiful country of Ireland and I thought I would share some pictures with you to celebrate the day. 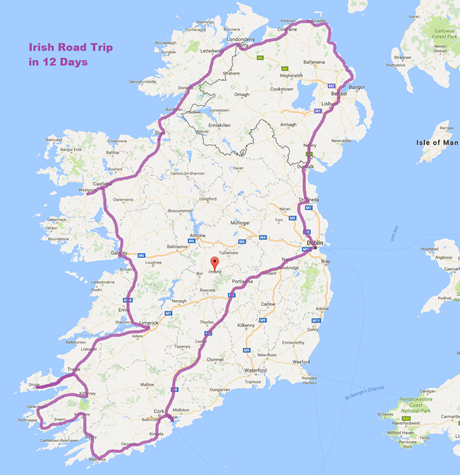 As you can see, we covered a lot of ground, sticking mainly to the coast roads. While I’m not as well-travelled as I would like, I have seen a lot of countryside, including a lot of Canada (some of the most beautiful scenery around), but nothing beats this road trip. (Click on the pictures below to see a larger view)

We started and finished in Dublin where there is plenty to see and do. Next we headed south to Cork and its surrounds including Cobh and Kinsale. If you ever get to Kinsale, I’d highly recommend stopping by Jim Edwards for a bite to eat and don’t forget to order the Banoffee pie for dessert (OMG it is to die for).

From Cork we continued to follow the coast and after a few false starts found our way to Mizen Head, the southernmost (and I’d hazard to say windiest) point in Ireland. The Ring of Kerry led us into Killarney and then it was on to the sandy beaches and stellar seafood chowder of Dingle (one of my favourite stops).

From Dingle we hit the road and headed to Galway and then on to Mulranny and the 42kms of biking/hiking trails that make up the Great Western Greenway. The walled city of Londonderry took us out of Ireland and into the U.K. and Northern Ireland. Rich in a history both ancient and modern, Derry, as it is also called, was the scene of many civil uprisings associated with the IRA and the Troubles.

Yes, that’s me hanging upside down to kiss the Blarney Stone

From Derry, we headed back to the coast and some of the most spectacular vistas I have ever seen along the Causeway and Ocean roads that lead to and from the Giant’s Causeway.

Highlights in Belfast included seeing the murals dedicated to the Troubles as well as the huge Titanic museum (definitely worth a look).

Our final stop before heading back to Dublin was Newgrange and the 5200 year old (that’s older that Stonehenge and the pyramids) passage tomb.

Well, I hope you enjoyed my little trip down memory lane. Now hoist a green beer and dish yourself up another bowl of Irish Stew and have a safe and happy St. Patrick’s Day.