If you are following Harry’s story, you know that Deadlocked, book three in the Harry Russo Diaries, is set for release on June 6. I’ll be counting down this week with posts featuring some of Harry’s supporting cast. 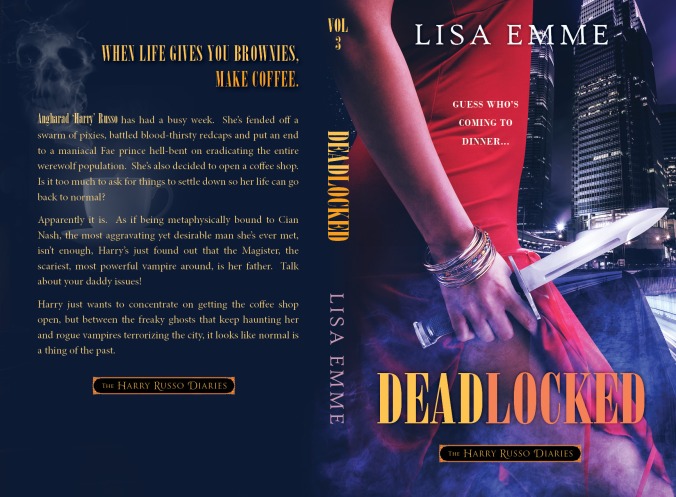 To start off the countdown, here’s a sneak peek (caution, contains a spoiler from Tooth and Claw):

“Harry, my dear Harry! So marvelous to see you.”  Salvador clapped his hands together like a gleeful three year old.  “You look wonderful.  None the worse for wear I see.”  He rose to his feet with the grace of a panther from where he had been sitting on my couch.  He took a step towards me and I admit it, I flinched.  His smile faltered and was replaced by a calculating look.  “Ah, I see.  The cat is out of the proverbial bag, is it not?”  He looked at Isaac who gave him a Gallic shrug.  “Well, then,” Salvador continued, his smile returning, “aren’t you going to greet your father properly?”  He held out his arms like he expected me to run and throw myself at him.

“No thanks, I’ll pass.”  I stepped back, putting more distance between us.  I looked at Tomas, Salvador’s lieutenant and a fellow dhamphir, who had also risen from his seat.  His expression was shocked, his normally ruddy Mediterranean complexion pale.  I couldn’t help myself and I laughed.  “At least I wasn’t the last to know.”  Tomas scowled at me.  We have a love-hate relationship.  We love to hate one another.